Testimony yesterday in the Taylor Parker murder case brought to light a $20 million real estate deal that Parker tried to pull off while only holding part-time jobs at a staffing agency and OB/GYN clinic. 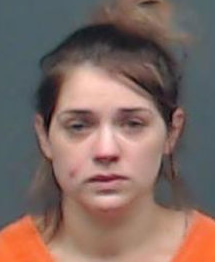 Real Estate agent Rusty Lowe testified that Taylor approached him claiming to be an heir to the Blackburn syrup fortune and that she wanted to buy property in McCurtain County along the Red River.

The property, listed at $4.7 million, would have required an upfront payment of $200,000.  Parker and her boyfriend, Wade Griffin, came to view the property and even signed a contract with Parker using the hyphenated name Taylor Parker-Griffin despite the pair not being legally married.

Lowe testified that over the next four months all of Parker’s alleged funding sources fell through.  Despite that, Parker continued to insist that the money would either come from fictitious oil and gas leases or from her “Uncle Butch” and added more properties to the original deal totaling around $20 million.

After four months and many attempts by Lowe to close the deal, Parker then blamed her mother for lying to her about the family fortune.

According to Dr. Angela Pate, whose husband Roger is related to Wade Griffin by marriage, Parker told the family bizarre lies throughout the time they knew her.  Pate testified that Parker claimed her mother always hated her, had run off with $3 million dollars of the family fortune, and tried to put a hit out on Parker, claiming that the “Mexican mafia” was involved.

Parker claimed that her home was being watched by undercover officers around the clock, though Pate never saw any evidence of this surveillance.  Parker then claimed that her mother had been arrested, taking her own life after being taken into custody.

Pate began to grow suspicious after the body of Parker’s mother Shawna wasn’t released for burial and said that Parker always had an answer for everything, up until Shawna later arrived at a family Christmas party.  Pate also testified to receiving a threatening message in her email that was allegedly from Parker’s mother, though it was later learned that Parker herself had written the email.

“Listen you know nothing about Taylor. Don’t try to be a mother figure to her. I did an amazing job making her look bad. It took time and accurantely planning my ever step of the way. She brought you to the bank and made herself look like she was lying to get a check cashed. I had already arranged everything. My helper knew she was coming with you because she called making sure. You wasted your time on her because that check was never good. Let her fail in life. Let her see what it’s like to have nothing. I’ve worked it out perfectly. I’ve arranged this all so there are cracks you see. Things won’t add up and she will look even more like a liar. I stole numbers to make her think people were calling and doing things for her and it was never them. This will not end well for her. No matter where she turns or what she says there wil be a like to fall back on her. See I am going to send her in such deep of a depression she will probably try to kill herself like she has tried before. But if not then making Wade leave will do the trick. See he will have no choice but the leave because nothing will be true. I’ve made his family turn on them from pretending to be people like a dealership that didn’t get paid. Does it click now to you people? Just let her fall into a hole and not get out. She will go crazy thinking she did the right thing for a curtain reason but in reality I made her think that way. She has a way of wanting to protect everyone. Well that’s what got her into this mess. If you want to be her mom good luck. She is like the child we should have terminated in the beginning because she was the accident I didn’t want. Maybe you will get the big picture and enjoy the mess. She King’s for someone to love her and when Wade leaves because I’ve made her out to be a liar well she’ll come running to you. Jus twatch. Nice website and Facebook. Maybe you can pop some sense into her because she has none.”

This email allegedly came from “Mandy Boyd” and was sent to Dr. Pate on April 7 of 2020.

The Pates went to Texarkana Police Chief Bobby Jordan, who testified that the threats sounded plausible at the time.

Dr. Pate also testified that Parker seemed insistent on buying a ranch on the Red River with Griffin and seemed worried that he would leave her.  Pate said she felt like Parker was “trying to buy him” and that she wanted to get pregnant in order to cement their relationship.

Pate said that she does a practice called “talking to her body” with her chiropractic patients and said that Parker texted her one day to say that she wanted to talk to her body because she had looked in a mirror and claimed that her aura had changed colors, indicating that she was pregnant.

Pate testified that the request made her uncomfortable and that she told Parker this, but Parker showed up for the test regardless.  Pate told Parker that the body talk was inconclusive, but Parker took that as a positive and asked for advice on how to tell Griffin she was pregnant.  Pate, knowing that Parker had undergone a tubal ligation and a partial hysterectomy, advised Parker to take a pregnancy test before saying anything to Griffin.  Parker, however, claimed the pregnancy was “intended by God.”

Parker sent Pate a “pregnancy verification letter” on April 9, 2020, with an estimated due date of September 22.  However, Pate realized that the name of the nurse who signed the letter was the one it claimed was positive for the pregnancy.  Parker became irate at this, claiming that it was the work of a “mole” her mother had hired at the clinic.

Pate testified that she took Parker to Walgreens to buy several pregnancy tests, all of which came back negative.  They bought several more with the same result.  She also took Parker to a clinic for a urine test.  Instead of her primary clinic that she said had botched the previous test, Pate took Parker to Health Express in Mount Pleasant.

When Parker emerged from the clinic, Pate said she had an odd look on her face and a printout in her hand.  The printout had a proof of pregnancy letter stapled to it which was similar to the original Parker had shown Pate, with the same due date on it.  Pate said the paper hadn’t been folded and that Parker had gone in with only her wallet.

Jurors were shown both fake letters before prosecution showed the real results from Health Express with a negative result.  Pate had no idea of Parker’s deception at the time, and Parker requested that Pate call Griffin to tell him about the positive result.

Parker continued to leverage Pate against Griffin, asking her or her husband to text him when he would become distant.  Parker would claim that if she became too stressed by Griffin’s attitude, she might lose the baby.

Parker went so far as to send Pate a picture of her bloody hand, saying that she was bleeding after being squeezed between cows on the farm.

Pate testified that it was clear to everyone but Parker why Griffin didn’t want to talk to her about the pregnancy.

“Wade didn’t want a baby.  It was a one-way relationship,” Pate said.  “He did not love her, and it was obvious to everyone.”